To share your memory on the wall of Edward \"Paul\" Rigby, sign in using one of the following options:

Print
Edward Paul Rigby, of Kincardine, passed away, at the South Bruce Grey Health Centre, Kincardine, on Monday, February 1st, 2021 at the age of 80.

Paul will be missed by his sibli... Read More
Edward Paul Rigby, of Kincardine, passed away, at the South Bruce Grey Health Centre, Kincardine, on Monday, February 1st, 2021 at the age of 80.

Paul will be missed by his siblings John Rigby and Marian Furklo and their families.

Remembered by his cousin Margot and family.

Paul grew up in Hamilton and was educated at Ridley College, St. Catharines. He received Bachelor of Commerce from McMaster University and completed post graduate studies at London School of Economics, London England.

He began training to be a chartered accountant but then left to join Canada’s Foreign Service as a Trade Commissioner in 1966. He served in Greece, Turkey, San Francisco and Peru, Bolivia.

Retired to form his own business, an international trading house, performing purchase management for foreign projects and buyers, shipping worldwide.

He also worked as an international sales representative for an industrial bearing manufacturer covering most of the globe, north and south. He was fluent in French, Spanish and could manage in Greek, Italian, Portuguese and Turkish.

Paul moved to Kincardine and formed a small wholesale business. He also had a shop focusing on his wife’s ceramic art.

Active in Kincardine Community Singers. While in Hamilton/Dundas he became senior active in Rotary and continued his service for Kincardine, most notably running the Rotary Bingo.

He loved his many pets and will be missed by his Border Collies, Skye and Polly.

Memorial donations to the Kincardine Rotary Club, Kincardine Community Singers or University of Guelph Animal Cancer Centre would be appreciated as expressions of sympathy.
Read Less

We encourage you to share your most beloved memories of Edward "Paul" here, so that the family and other loved ones can always see it. You can upload cherished photographs, or share your favorite stories, and can even comment on those shared by others.

Posted Feb 16, 2021 at 04:46pm
Dear Jane,
I was saddened to see that Paul has passed on. My sympathies to you. I always enjoyed our conversations at the clinic. He had such a calm nature with his pets.
Take care,
Tammi Ribey
Comment Share
Share via:
SR

Posted Feb 15, 2021 at 08:14am
Dear Jane,
I was very sorry to hear of Paul's passing. You and Paul were some the first people I met when I began my year as an exchange student in Dundas in September 1981. Labour day weekend up at the cottage with you and your parents was a very special time. It was lovely catching up with you both in Kincardine in July 2019. How time flies. Thinking of you and sending you lots of love.
Sarah
Comment Share
Share via:
JM

Posted Feb 14, 2021 at 05:22pm
We were saddened to see the notice of Paul's passing at only 80 years young.
May all your wonderful memories of your life with him, your world travels, and family and friends bring you great comfort in this difficult time. You are in our thoughts and prayers.
John and Joyce MacRae,
Dundas, ON
Comment Share
Share via:
CK

Posted Feb 11, 2021 at 07:17pm
Dear Jane,
I was so very sorry to read about Paul's passing recently. You and Paul were one of the first couples I met when I moved back to Kincardine in 2004, and I was so impressed with your involvement in the community. Such a tremendous loss, and I hope your beloved pets will help you treasure the memories. I will miss seeing Paul at his vendor table in Market in the Park.
Take good care of yourself. Stay Safe.
Blessings,
Catherine Kennedy

Posted Feb 11, 2021 at 01:09pm
Dear Jane ,So sorry to hear of Paul's passing .It was always so nice to come to your place and hear the stories .Rest in Peace Paul .
Comment Share
Share via: 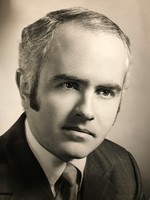