To share your memory on the wall of Larry Munro, sign in using one of the following options:

Print
Larry Neil Munro, of Tiverton, passed away suddenly, at his home on Thursday, April 8, 2021.

Born November 6, 1956 to the late Clifford and Buelah (née Brunton) Munro. Survived by his loving wife of 25 years Linda (née Oehring), and a ... Read More
Larry Neil Munro, of Tiverton, passed away suddenly, at his home on Thursday, April 8, 2021.

Born November 6, 1956 to the late Clifford and Buelah (née Brunton) Munro. Survived by his loving wife of 25 years Linda (née Oehring), and a devoted daughter Heather Wilhelm, her husband Michael and two precious grandchildren, Jocelyn and Jack, which he put on the highest pedestal. Papa built them many toys and if they wanted to go faster, then more speed it was. His family was his pride and joy and were always put first. They travelled many places together and had more plans for the future.

Larry was truly one of a kind, tell it like it is kind of guy. He could build anything, fix anything and if he couldn’t, then it just wasn’t fixable. One of the many vehicles he wrecked and rebuilt was a 1967 Cadillac Calais, it soon became a monster machine and was well known in the area for pulling vehicles out of snowbanks and riding in parades. In 1990 he bought a Chev truck body and built a diesel power train to power it and it still runs today. Larry had a love of the sky. He has owned 7 ultralights since 1994 and couldn’t wait to get back up there on a nice day. He also loved 4 wheeling with family and friends, the more mud to play in the better. Summer camping was inevitable, and he enjoyed the last 3 winters in Florida.

Larry was a heavy equipment mechanic by trade. In 1980 he worked 3 contracts at the Terra Mine Exploration in the Article Circle where he repaired mining equipment, scoop trams and heavy trucks. Other mechanic positions that he talked about often and made lifetime friends at were Bruce Coach Lines, RKM Wood Products and Bruce County Highways Dept. In 2008 he received the Better Practices Competition award for Category-Equipment Innovation from the Ontario Good Roads Association. This award was perfect for him because innovation is just another word for McGyver. Not only was he talented, he had many nicknames to go with it, for example; McGyver, Doc, Cecil, and My Larry.

Due to Covid-19 restrictions, a private family committal service will be held at the Tiverton Cemetery.

Memorial donations to the Tiverton Walk of Memories, where his family will plant a tree in his name or a charity of your choice are appreciated as expressions of sympathy.

The family encourages you to leave a memory on the Davey-Linklater Funeral Home website so that in time, we can reminisce with you and smile.
Read Less

Print
Due to Covid-19 restrictions, a private family committal service will be held at the Tiverton Cemetery.

Donations are being accepted for: Tiverton Walk of Memories .

We encourage you to share your most beloved memories of Larry here, so that the family and other loved ones can always see it. You can upload cherished photographs, or share your favorite stories, and can even comment on those shared by others.

Posted Apr 25, 2021 at 11:30am
So sorry to hear about Larry's passing. I always enjoyed talking with him about his projects. My condolences to the entire Munro family. Steve Ogilvie
Comment Share
Share via:
CM

Posted Apr 23, 2021 at 09:51am
Larry could always bring a smile to my face. I was fortunate enough to work with Larry at the County , he always went out of his way to help and offer very helpful advice when asked. He is a friend who will be greatly missed.

Posted Apr 21, 2021 at 11:06pm
Linda, Heather and Family,
I remember back so many years ago when Larry came into your lives. He seemed so helpful, and always put big smiles on all the faces around him! Although we've lost touch over the years, I have fond memories of you all. I'm sending you a gigantic virtual hug, and know that you will do your best to manage through this tough time. Your extended families are in my thoughts. **HUGS**
Comment Share
Share via:
CS

Posted Apr 16, 2021 at 07:31pm
Our deepest & heartfelt condolences Linda, Heather and family, Murray and Gladys and family, Ruth Ditner and Ron.
Larry was a super friend whom we shared some very special memories with, from water skiing, to snowmobiling, playing cards, and just hanging out. Mark remembers fondly the time Larry fabricated a "special" bed equipped with a pressurized tank to 'soak' the opponents at a bed race at the Tiverton Fall Fair. Larry was a 'one of a kind' man whom we thought the world of. RIP our good friend, until we meet again
Comment Share
Share via: 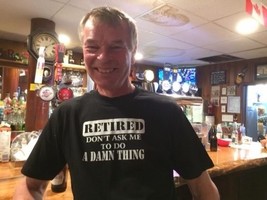 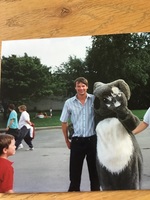 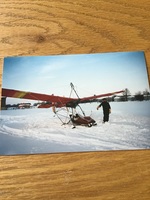