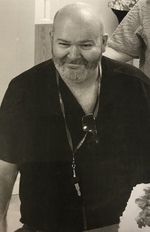 It is with heavy hearts that we announce the passing of Martin Hedger of Kincardine, after a short stay in the Grey Bruce Health Services – Owen Sound Hospital on Monday the 19th of October at the young age of 51.

Loving uncle of Dominic Hedger of Durham and Kyleen and Xander Hedger of Wingham.

He will also be dearly missed by Auntie Maureen and his many, many friends.

Born in England on the 16th of July in 1969, Martin moved to Canada with his family when he was 8 years old. He attended Durham College where he received a certificate in the General Arts and Science program and majored in Social Studies. Martin spent most of his working career as a Construction Labourer, before turning one of his many hobbies of disc jockeying into a job and working at Gilley’s Bar & Grill from 1991-1992. At a young age he enjoyed woodworking, weight-lifting and tennis, in the summers of 1989 and 1990 he worked as a Tournament Director for the Kincardine Tennis Club.

Martin was a humble and contemplative individual. He enjoyed reading and writing daily. His passions consisted of studying interior design of modern homes and listening to music. Feeling truly blessed to have lived in the great community of Kincardine, he enjoyed spending Mondays with friends attending Drop-in at the Bridge. The feeling was mutual, in a Facebook post they wrote: “Martin leaves us with many fond memories, including his published book of wisdom quotes. In the manuscript for his second book, he wrote, ‘To mature is an endless journey of seeing life with new eyes.’ As anyone who spent time with Martin knows, his company has taught us to see life through a new lens that seeks the good, the humour, and the opportunities around us. Martin, we will miss you dearly.”

A celebration of life will take place at a later date.

In lieu of flowers, memorial donations to the Kincardine Hospital Foundation, Diabetes Canada, Canadian Mental Health Association or Drop in at the Bridge (cheques payable to 'BIC Church') would be appreciated as expressions of sympathy and can be made by contacting the funeral home (519-396-2701).

All rights reserved. This obituary is also archived at obittree.com