To share your memory on the wall of Robert \"Irving\" Reid, sign in using one of the following options:

Print
Robert Irving Reid of London and formerly of Kincardine, passed away peacefully with his family by his side at McCormick Home in London on Saturday December 19, 2020, in his 93rd year.

Lo... Read More
Robert Irving Reid of London and formerly of Kincardine, passed away peacefully with his family by his side at McCormick Home in London on Saturday December 19, 2020, in his 93rd year.

Loving father of Terry (Marlene) and Kevin (Sandra) all of Kincardine.

Irving will be fondly remembered by his nieces, nephews, cousins, extended family and friends.

Irving was born on January 14, 1928 in Kincardine Township to Robert and Ella (Shipley) Reid. He had many careers over the years including fuel delivery for C.E. MacTavish and promoted to driving the bulk tanker truck, Insurance Agent for Prudential Insurance and later was employed by Ontario Hydro. Irving later retired in 1993.

Irving married Vyetta Phillips in 1949 in Whitechurch. They were the proud parents of their boys Terry and Kevin. Over the years Vy and Irving took up residence in Lucknow, Wingham and Kincardine.

Irving had an extreme love of camping throughout his years with the comfort of a few trailers and motor homes. There wasn’t a car that he didn’t show an interest in including Model T’s and his Corvair. He was a natural musician who loved to play the piano, organ, guitar, mouth organ and saxophone which he played by ear. Many Saturday evenings were enjoyed at the St. Augustine Hall dancing the nights away with Vy. Vyetta later passed away in 1993.

In 1995 Irving married Margaret Dixon and lived in Kincardine. They thoroughly enjoyed travelling throughout Canada and the United States. Irving was welcomed into her family by Margaret’s sons Orville (Gail) and their children Kim and Kelly and Don (Gloria) and their son Darryl. They enjoyed an active 13 years together before her passing in 2008.

In 2010 Irving married Ruth Jackson, moving to London and they continued his love of camping and her introduction to it. Ruth and Irving spent time going for long drives, eating out, returning to Kincardine for the Saturday night pipe band and visiting family and friends.

Due to the Provincial Restrictions please register to attend the visitation by calling the Davey Linklater Funeral Home 519-396-2701 or by using the link: https://signup.com/go/jCgUWTm. Covid 19 protocols will be in place and all attendees must wear a mask.

In lieu of flowers, the family wishes memorial donations be made to the McCormick Home Foundation, London or the Alzheimer’s Society of London.

Special thanks to the staff of McCormick Home for their kind and caring support of Irving.

Donations are being accepted for:
MCCORMICK HOME FOUNDATION OF LONDON, ONTARIO ALZHEIMER SOCIETY OF LONDON AND MIDDLESEX

We encourage you to share your most beloved memories of Robert "Irving" here, so that the family and other loved ones can always see it. You can upload cherished photographs, or share your favorite stories, and can even comment on those shared by others.

Posted Dec 22, 2020 at 10:30pm
To Ruth and the Reid families I would like to send my sincere condolences to all of you.
Irving was my husband George’s first cousin and when we were at our cottage at Inverhuron we had many good visits with Irving. George passed away Five years ago.
I am sure that you will have many good memories that will be a comfort to you all.

Posted Dec 22, 2020 at 11:58am
Our sympathy on the passing of your Dad/ Grandfather. The obituary was a lovely tribute to him and the memories shared.
Comment Share
Share via:
EN

Posted Dec 22, 2020 at 11:10am
To the Reid family and Ruth,
My sincere condolences to all. May the happy days with Irving help to
Soften the loss. 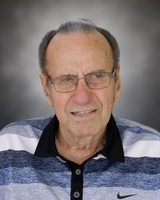