To share your memory on the wall of Ruth \"Joanne\" Morris, sign in using one of the following options:

Print
Ruth Joanne Morris of Kincardine. On Friday, July the 3rd peacefully at her home in her 87th year.

Pre-deceased b... Read More
Ruth Joanne Morris of Kincardine. On Friday, July the 3rd peacefully at her home in her 87th year.

Daughter of a United Church minister, Joanne was born in St. Thomas in 1934, lived in Lawrence Station, then Thamesford, and later Riverdale and Earlscourt in Toronto. She worked for Eaton’s while in High School. Because Joanne lost her father while in Grade 12 she had to be frugal to afford university tuition. Graduate of Victoria College at the University of Toronto, studying English Literature and Religion under Northrop Frye. Upon graduation she entered Teacher’s College at the University of Toronto’s Faculty of Education. Her teaching career began in Kincardine, and was followed by teaching positions in Toronto at Northview Heights, Parkdale Collegiate, Castle Frank, and Heydon Park. Appointed as an instructor in York University’s Department of Education, she went on to become the Head of Special Education at Heydon Park. Over the years, Joanne participated on various committees within both her church and the Toronto District School Board. She had a tremendous empathy for the learning challenges and needs of students, something that became the driving force for her studies in Special Education and the development of board-wide curriculum.

Joanne and William were tremendous hosts, sharing laughter, fun and engaging thought-provoking intellectual discussions with both friends and family at their home in Toronto and their cottage at Bruce Beach. She was devoted to her mother who was big part of her life and was grateful to have had the opportunity to provide palliative care at the end of her life.
In her own final hours, Joanne took great comfort in sharing with her husband and son 2nd Corinthians 4:7-18: “Struck down, but not destroyed … what is seen is temporary, but what is unseen is eternal“.

In lieu of flowers, donations to a charity of your choice would be appreciated and can be made by calling the funeral home at 519-396-2701.

Print
Private family funeral arrangements have been made.

We encourage you to share your most beloved memories of Ruth "Joanne" here, so that the family and other loved ones can always see it. You can upload cherished photographs, or share your favorite stories, and can even comment on those shared by others.

Posted Jul 08, 2020 at 11:47pm
I would like to extend our sincere condolences to the Morris family. It seems that Mrs. Morris was an extraordinary woman, ahead of the times, and saw the value in education at all levels. What an impressive history. My children have been fortunate to have Mr. Watson Morris as a teacher. It would seem that the teaching gene is strong, as excellence in teaching was passed down to her son. I am sure she was proud of her legacy.
The Hunsburgers (Jamie, Jennifer, Jacob, Owen and Claire))
Comment Share
Share via:

Posted Jul 07, 2020 at 12:43pm
Dear Watson,
We are very sorry to hear of your Mom's passing. Her choice of scripture is SO true,hugs and hand shakes.
The MacLeod Family ( Sandy, John, Peter,Stewart,Sam, and Erin)

Posted Jul 07, 2020 at 10:41am
We were very sorry to read about Joanne today. She was such a nice companion for my gramma Linda at Trillium Court. I would always stop in to say hi and have a chat with Joanne whenever we visited Gramma. We are also thankful that she passed on her love of teaching to Mr. Morris, my teacher. It is her legacy.
We share in your sadness and wish you peace and love in the days to come.
Faith Catalan and family
Comment Share
Share via:
DS

Posted Jul 06, 2020 at 12:40pm
Dear Bill,
I saw the notice in today's Star about Joanne's death. She was Joanne to me at university rather than Ruth. I particularly liked the reference to "sharing laughter, fun and engaging thought-provoking intellectual discussions with both friends and family"

That describes my memories--with you both, but of course more particularly when we two solved the problems of the world in our many discussions in the 1950s--more than 60 years ago.

I was thinking of you earlier this week as Carol and I watched the CBC documentary focusing in part on the conflict between cottagers and First Nations claims at Sauble Beach. I know the two of you enjoyed the beaches of Lake Huron--as I did growing up in Owen Sound.

I was also remembering that dramatic summer of 1955 when we both discovered Northwestern Ontario.
Keep up your spirits.

Posted Jul 05, 2020 at 06:00pm
Nr Morris and Bill, I was so sad to read about the passing of Joanne. I enjoyed seeing her during our visits to Trillium Court and she absolutely doted endlessly on my son Charlie. She always had a friendly word and a big smile for us and Charlie loved waving to her and trying to give high fives. She was a formidable woman and my thoughts are with you both as you grieve her passing.
Comment Share
Share via: 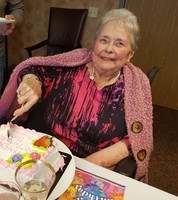